Welcome to Nick of Time Foundation

We have a very special story to share. On Saturday June 4, 2022, an AED and SaveStation Tower donated by Nick of Time Foundation (NoTF) and DP Open was used to save a life.

13 year old Nina was playing in the Copa Surf Tournament hosted at Starfire Sports Complex in Tukwila, WA. when she suddenly collapsed on the pitch. Her coach recognized the emergency and called for help. Her father, and a nearby mom who is an RN, rushed to Nina’s side and recognized that she was in sudden cardiac arrest and began CPR immediately while several other parents called 911.

An employee of the Sports Complex ran to retrieve the AED housed inside the 24/7 accessible SaveStation Tower. Within those first few critical minutes, the pads from the AED were placed on Nina’s chest and a shock was delivered to resuscitate her. By the time paramedics arrived Nina was breathing again. She was taken to the Seattle Children’s Hospital where she underwent testing and is recovering well from heart surgery.

The SaveStation and life-saving AED were placed less than a year ago at the Starfire Sports Complex thanks to Adam Lang (Founder of the DP Foundation) and Nick of Time Foundation, with money raised from a 2021 DP Open charity golf tournament. The tower and AED was placed in memory of Adam’s friend Daniel Phelps and NoTF namesake Nicholas Varrenti – both of whom lost their lives to sudden cardiac arrest at a young age.

Below is a picture of Nina at Seattle Children’s giving a thumbs up to her teammates, coaches, girls on the other teams, and the emergency responders. This was taken not long after she went into sudden cardiac arrest. 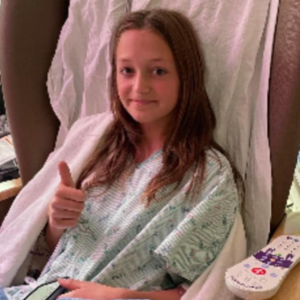 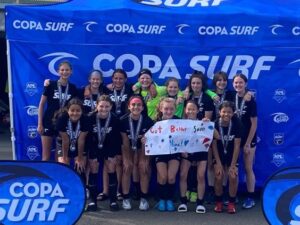 For the remainder of the tournament, her Bend FC teammates and all the other 09 girls teams honored Nina by making get-well signs and wearing a patch on their jerseys with her name on it.

90% of people don’t survive SCA. This story is a reminder of what can be achieved when the chain of survival is in perfect harmony and when bystanders are prepared and take action.

The vision of Nick of Time Foundation is to increase awareness about sudden cardiac arrest (SCA) and how it affects children and young adults with the goal of saving lives through SCA education and awareness, the formation of school and community emergency action plans that include CPR/AED training, ECG youth heart screenings, volunteer opportunities, and scientific research

The mission of Nick of Time Foundation is to prevent Sudden Cardiac Arrest (SCA) in children and young adults.